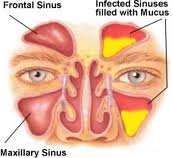 What Are Sinuses?
The sinuses are air-filled spaces found in the bones of the head and face. Sinuses start developing before you are born and some of them keep growing until you're about 20. There are four pairs of sinuses, or eight in all. They are located on either side of the nose in your cheeks, behind and between the eyes, in the forehead, and at the back of the nasal cavity.

The cilia beat back and forth in waves to clear mucus from the sinuses through a narrow opening in the nose and then move the mucus toward the back of the nose to be swallowed. If you have a cold or allergies, the membrane gets irritated and swollen and produces even more mucus.

What Do Sinuses Do?
The biological role of the sinuses is debated, but a number of possible functions have been proposed
When Good Sinuses Go Bad What about that cold that won't go away? A cold virus can:
When the tiny openings that drain the sinuses get blocked, mucus becomes trapped in the sinuses. Like water in a stagnant pond, it makes a good home for bacteria, viruses, or fungi to grow.

If a cold lasts for more than 10 to 14 days (sometimes you may have a low-grade fever), you may have sinusitis. This means an infection of the sinuses. Sinusitis is a pretty common infection.

Acute Sinusitis Lasts A While Acute sinusitis may be diagnosed when a cold lasts more than 10 to 14 days. Chronic sinusitis means a person has had symptoms for more than 3 months. Symptoms may be similar to acute sinusitis, but typically are less severe and not associated with fever.

In either case, symptoms may include:

Less often, a kid could have headache or pain behind the eyes, forehead, and cheeks.

How is our treatment different from conventional treatment?
Many doctors give antibiotic to kill the bacteria. It gives relief in short term but then it has been observed that it keeps on reoccurring and stronger antibiotic or surgery is required. But this treatment is incomplete. Unless you remove all the mucus from the sinus cavity, it will keep on reoccurring. In Herbal medicines, our top priority is to clear the sinus cavity. And at the same time give some herbal antibiotics so that both the actions clearing the cavity and killing the bad bacteria goes on in the same go. So we get excellent results. In many cases we have seen that patients who were suffering from chronic sinusitis for last 4 – 5 years got 80% cured in just 1 month time.